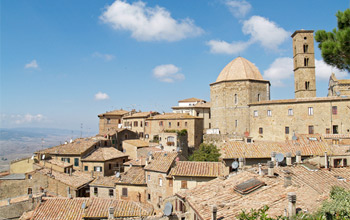 Every civilization has left its mark here. Are especially deep impression Etruscan and medieval; but there are leftovers Romans, nor the palaces and churches of the Renaissance and Baroque. There are many things to see; the character of Volterra is given by a set of historical elements and environmental.
His identity is given by a set of historical and environmental, and in particular from the activities of its inhabitants, especially from alabaster, unique in the world.

A stop is not enough to make hasty idea of Volterra: you sostarci longer, and not stop only to visit the Piazza dei Priori, of ‘Etruscan Arch door, the Etruscan Museum, but walking the medieval streets to live place!

The Gateway Arch, only door preserved Etruscan Volterra, is a place of identity Volterra, a special charm, mystery and impossibility of unveiling. The first impression that this ancient port arouses is as if it were really beyond any measure of time and space, as if his passing had the power to bring the traveler in an “other” dimension.
And the miracle of balance and strength, a symbol of the transition from the primitive to the story. The arch of Volterra is one of the first examples of real arc in Italy, which has suffered less than other additions Roman and subsequent alterations and that still keeps the magnificent grandeur of the past.
And better to reach the door from Borgo Saint Alexander, before entering inside the Etruscan walls surrounding the old town, to see it right away from the front. The effect is extraordinary. Starting to rise, the monument is immediately kinetic, dynamic, enveloping. Her three male heads of stone, marred by time, jut forward with vivacity; as the deity of the city.

The square is a triumph of architecture dry, almost didactic in its vertical harmonies. And the true center of life Volterra, where you come from every point of the compass through the streets or alley marked by small arches of musical geometry.

In the winter home to the market, rich in goods and colors, in the autumn festivals with local products. In summer it is the scene of musical events and festivals that awaken the historical memory. For Volterrani is the privileged place of observation and meeting, the chatter, the encounter. 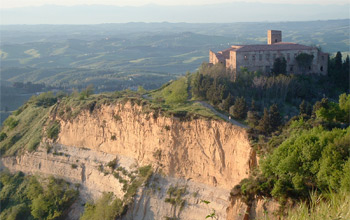 Flounces, even before being a geological phenomenon, sand and clay beneath the surface, are one of the fascination of Volterra. And a contrast to great effect: the city perched with its edges on the precipice and the horrid spotted along the coast by trees and gorse bushes. Flounces damage extent dell’inacessibilità town, characterize in the opposite direction to the movement of the hills; make it a sublime place, a unicuum in Tuscany.
Always spectacular, are beautiful during the autumn mists, when you lose all natural connotation and give Volterra’s character “actually suspended”, the true heavenly city, always on the verge of sinking into Hades.

Volterra and the Maremma have in common, even in the legend, the characteristic of being anything from the world. The surroundings of Volterra are vast and fascinating: they’re all inside glance at 360 degrees as long as possible, from the apex city’s tallest.
Rich in nature, the surround as a nature reserve defensive and full of resources: wood and hollow, flat swampy and hot smoke of Larderello geothermal park. It ‘a palette of soft colors, intense enough to saturate often the breath of the tourist and traveler.